The Roots of Tory Racism in Leicester East

The Conservative Party has a deep and abiding problem with racism – a core commitment to bigotry that applies as much in Leicester and Leicestershire as it does in the rest of the country.

For instance, in 2013, Cllr Peter Batty, who had been a Tory councillor in Groby for seven years, “was banned from sitting on Groby parish council for a month after an independent committee found he breached the code of conduct requiring councillors to treat all races equally.” Then in 2015 he made national headlines while serving as the leader of the Conservative party in Hinckley and Bosworth because he had been busy “forwarding a series of sexist, racist and ­pornographic emails” to a an undisclosed list of people. A report in the local press added:

“One angry recipient, who also works for the council’s Tory party, said that it was ‘an absolute disgrace’. He said: ‘This has gone on for years, but many people haven’t even seen the worst. I come from the same political party as Cllr Batty, but my loyalty is to the public.’”

Cllr Batty subsequently resigned from the Tories and stood (unsuccessfully) as an independent in the April 2015 elections — notably with the Tories choosing not to stand against him.

At the time of this disgraceful incident the Conservative chairman of Cllr Batty’s Charwood constituency was an individual named Hanif Asmal, who featured in the national press around the same time for attempting to get the police to arrest six pensioners who were handing in a petition to his office that (correctly) called for the resignation of the local Tory MP.

Presently Hanif Asmal is the election agent for the Tories parliamentary candidate in Leicester East. While earlier in the year Mr Asmal acted as the election agent for all the Conservative candidates in the Leicester city elections: an election that was marked by utter electoral failure on the part of the Tories, but featured a further embarrassment when one of their candidates was forced to stand as an Independent because of his racist and sexist posts on Facebook. Incidentally this same candidate was a well-known racist in Leicester and had previously stood in the 2015 city elections for the far-right English Democrats.

So, in many ways it is rather unsurprising that Mr Asmal is now overseeing yet another electoral race that is fuelling racism and division in Leicester by representing Bhupen Dave, a former Conservative councillor for Oadby Woodlands ward from 2012 until May this year (when he was ousted by a Lib Dem). Fittingly Bhupen Dave is accustomed to racist controversies from his time as a councillor in the county, where two fellow Tory councillors based in the Oadby Grange ward (Cllr Teck Khong and the late Cllr Bob Fahey) are both out-and-out racists (for more on these cases follow this link).

The ongoing electoral contest taking place in Leicester East however has centred around various wrongful charges of racism that have been laid against Labour’s candidate Claudia Webbe, most specifically that she is anti-Hindu and anti-Indian. Sadly, these charges are not just emanating from Tories, but also from ex-Labour members and councillors. This should not be surprising given the anti-democratic manner in which Keith Vaz was allowed to run the Leicester East CLP for the past thirty-odd years – it is appropriate that he would have surrounded himself with opportunists without a shred of commitment to socialist ideas. One such example is the former Labour Party member Karan Modha, a local businessman who is currently circulating his own leaflet across the city which calls upon residents to boycott Labour at this election. 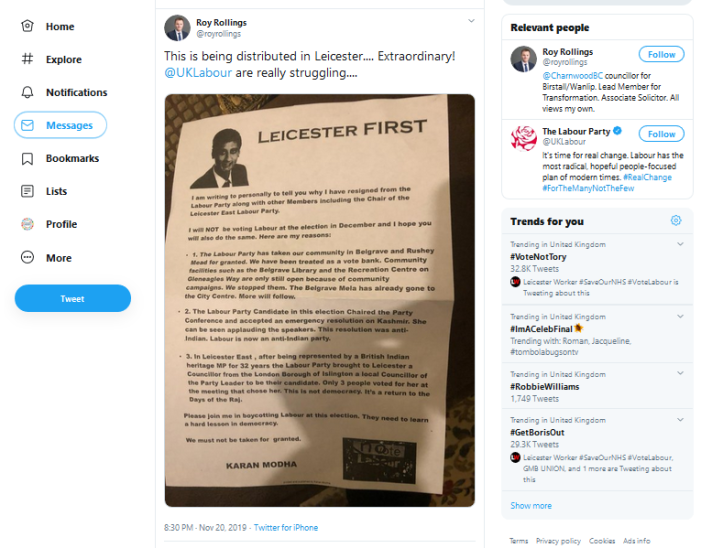 Another well-known local Labour opportunist who is featured in Mr Modha’s leaflet was Vaz’s chief-crony (and a diehard Blairite to boot), Cllr John Thomas, who had been the chair of the Leicester East CLP for years, but quit the Labour Party when Vaz was finally forced to resign last month. Cllr Thomas along with Keith Vaz were both involved in a local scandal a few years ago when their actions amplified the divisive propaganda of a local pressure group called British Hindu Voice — a group which is led by Vinod Popat, a leading Conservative Party activist in Leicester.

Mr Popat is well-connected to the very small numbers of Conservative Party activists that exist in Leicester, and in 2013 the Charnwood Conservative Association posted a summary of a “successful curry night” fundraiser that was held by the Leicester East Branch of the Conservative Party which was apparently “Organised by local Conservative members Vinod Popat, Bhupen Dave, Mukesh Naker and others…” 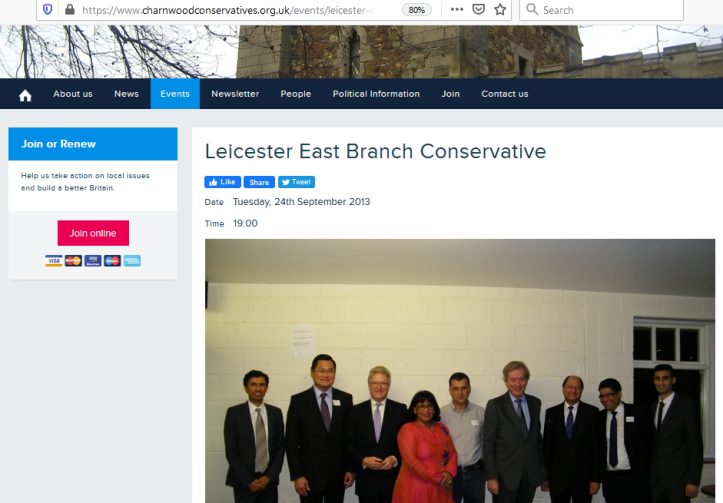 I have already highlighted the backgrounds of Mr Popat and Bhupen Dave, but the third named Tory fundraiser, Mukesh Naker, is worth introducing too because he is currently promoting divisive and racist leaflets in Leicester East in support of his old friend Bhupen Dave.

Mr Naker is undertaking this work for the Tories through his position as the Managing Director of a little-known propaganda enterprise called “Operation Dharmic Vote” which is distributing a leaflet that calls for a vote for Bhupen Dave to prevent the Dharmic community ending up with “poison” (apparently Claudia Webbe)! No doubt the Tories will be declaring this propaganda leaflet as part of their election expenses in Leicester East. I say this because just 2 weeks ago “Operation Dharmic Vote” registered with the electoral commission at exactly the same address as that at which British Hindu Voice is based, which is also where Mr Naker is currently employed as British Hindu Voice’s Communications Officer. 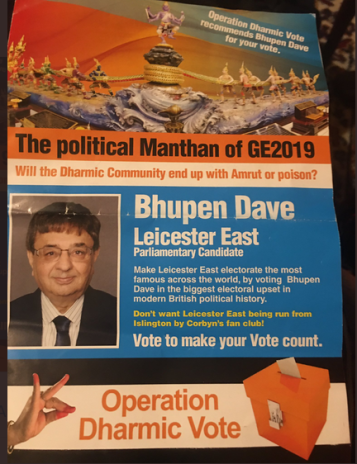 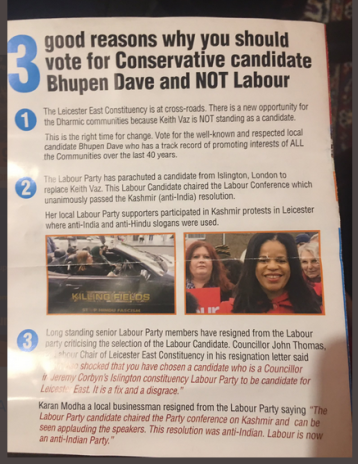 Finally in closing I wish to draw attention to an excellent article that Labour’s Shami Chakrabarti has just written for the Guardian newspaper that exposes a related and “sinister campaign that uses WhatsApp messages demanding that Britons of Indian-Hindu extraction vote Conservative on the basis that Labour members such as me are ‘traitors to their ancestral land, to their family and friends in India and to their cultural heritage’.” By way of an example Chakrabarti goes on to explain how:

“…the Tory candidate in my late parents’ constituency of Harrow East seems to be up to his neck in this cynical attempt at divide and rule by faith. People in Harrow have already spoken out. Bob Blackman is neither Hindu nor Muslim but employs this far-right playbook at the expense of others so as to weigh their votes without counting the long-term cost of fanning the flames of racial tension.”

And although the Guardian article does go into the details of this case, in 2015 one of the key Tory activists involved in working with Blackman to propagate such racial division was Mukesh Naker. That is why I think it is clear for all to see that today the Tories are as committed to racism as they always have been, and it also why they are so worried about participating in political debates for fear that they will expose themselves in front of the public. Hence this being perhaps one good reason why Bhupen Dave refused to take part in the most recent political hustings event that was held in Leicester East and had been organised by Voice4Change England which “is a national advocate for the Black and Minority Ethnic voluntary and community sector (BMS VCS).”