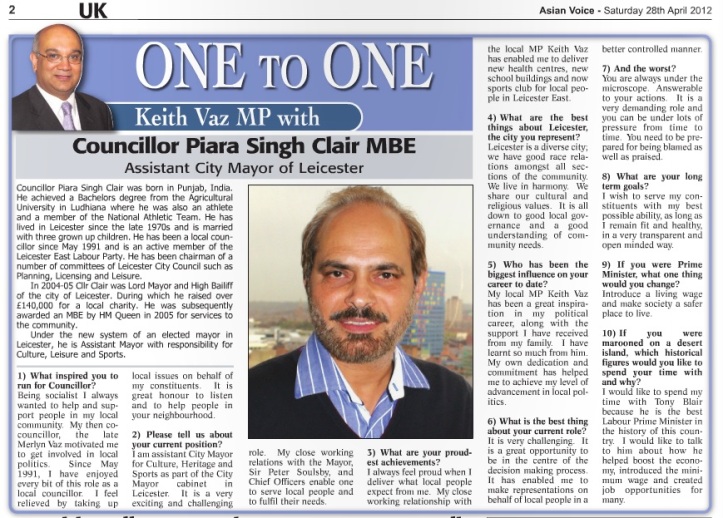 Fifty-nine-year-old Piara Singh Clair has been prominent in Leicester’s politics since 1991, when he was first elected a local councillor. Councillor Clair is however no ordinary councillor as he is part of Sir Peter Soulsby’s exclusive and none-too-democratic Mayoral team, and he even has the special title of Assistant City Mayor for Culture, Leisure and Sport.

In 2005 Cllr Clair was awarded an MBE after raised £140,000 for the local Kidney Care charity while he served a term of duty as Leicester’s Lord Mayor. It is also worth noting that last year, in addition to serving as the ward councillor for Rushey Mead, he had the unfortunate honour of acting as the election agent for his local warmongering MP, Keith Vaz.

Although Cllr Clair has not said much of note to the local media, in 2012 he was interviewed by Keith Vaz for a feature in Asian Voice magazine, and some of Cllr Clair’s answers were very revealing, if not bizarre.

Vaz asked Cllr Clair: “Who has been the biggest influence on your career to date?” to which he answered that Keith Vaz had been his greatest inspiration. A cute touch.

Cllr Clair then outlined that his “long terms goals” are to serve his constituents “in a very transparent and open minded way.” Good again: but unfortunately Cllr Clair’s idea of open minded veers on the side of ludicrous. I say this because when asked which “historical figure” he would “like to spend his time with” if marooned on a desert island he answered:

“I would like to spend my time with Tony Blair because he is the best Labour Prime Minister in the history of this country.” 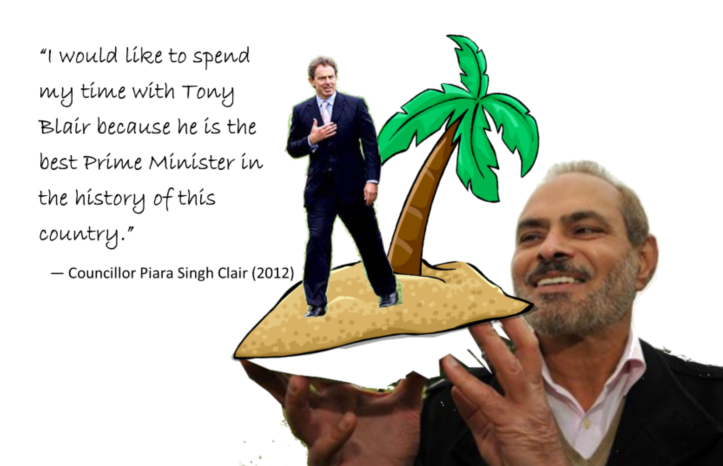